Jon Byler Dann, above, survived the devastating tornado that struck Washington, Ill., by hunkering down in the basement clutching his four children – ages 8, 5, 2½ and 1½. But an important member of the family was still in harm’s way. Before the storm, as debris started to hit his house, Byler Dann had tried to coax the family dog, Maggie, into the safe room. The skittish animal refused to leave her kennel. After the storm passed, Byler Dann emerged from the basement to find that his home of five years had been destroyed above him. Maggie was missing and Byler Dann assumed his beloved pet was dead.

Nearly 30 hours later, while searching through all that was left of 1322 Coventry Drive, family friends heard a faint bark coming from beneath where they were standing.

They immediately started digging and discovered Maggie buried beneath the rubble, wrapped in a piece of carpeting.

Byler Dann burst into tears. Maggie was shivering, filthy and in obvious pain. But she was alive. 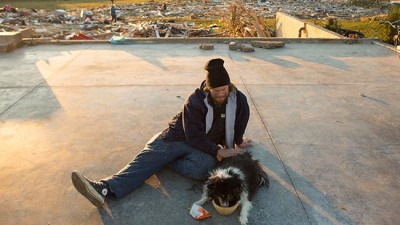 After giving her water, Byler Dann posted her photo to his Facebook page while friends arranged to drive her to a local veterinarian’s office – Teegarden Veterinary Clinic.

Maggie is being treated for a dislocated hip, but is expected to be okay. Byler Dann, 37, has had the 11-year-old dog since she was 4 months old.

“I felt intense relief and elation but also just panic,” Byler Dann says of finding Maggie injured. “I’m very thankful and blessed to have my wife and my children. And finding my dog today was just unreal.”

Update – The clinic reports: “Maggie is doing good considering everything she has been through. We expect a good prognosis with her. We’re taking donations by calling the clinic (309-444-2311) or mailing to 2323 Eureka Rd., Washington, IL 61571. Maggie’s current needs have been met, but further contributions will go towards other pets that we have been treating here at the clinic as a result of the tornado.”