Annah is reunited with her delighted owner.

A much-loved pet dog that went missing has been found safe and well in Ashford – 500 miles from home in Scotland.

Annah, a seven-year-old Shetland sheepdog, was reported lost by her owner Leanda Scott-Loosemore in May after disappearing from Cupar, in Fife.

Despite alerting the police and posting an appeal on Facebook, Mrs Loosemore was shocked to received a call from Ashford Borough Council to say Annah had been discovered wandering the streets here.

Officials were able to trace Annah’s owners after scanning her microchip.

Although it is not known how Annah ended up in Ashford, the pet is now happy at home again after being reunited with her family in Scotland just in time for Christmas.

Mrs Scott-Loosemore – who is mother to Jayden, four, and three-year-old Chantelle – said: “We had given up hope of ever getting her home. When we got her back up to Fife it was a very, very happy time!

“My kids were so excited to see her, as was she to see them.”

Ashford council spokesman Mark James said: “We were delighted to be able to reunite Anna with her owner.”

He said Annah had been found at Ducks Farm in Smarden. 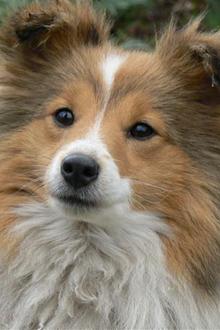 Mr James added: “Apparently a builder on site saw the dog running around in a nearby field and managed to catch it and report it to the council.

“We have a microchip reader and so always scan dogs when we pick them up as strays so that we can see if it is possible to trace the owner as soon as we can.

“We read the chip and then phoned the company that administer the microchips and they tally the number up with the contact details they have and that’s when we were made aware the dog had been stolen and from there made steps to reunite Annah with her owner.”

Mr James said the incident emphasized the importance of having a dog micro-chipped.

He added: “We are pleased that there was a happy outcome to this story and that Annah is now safe and enjoying home comforts once again.”